I’m so excited to share Uncharted’s cover with you today.Once again, I have a fantastic group of bloggers who are helping me out with the reveal. Be sure to check out their blogs!


And in case you missed it the other day, here’s the blurb:

Tracey Garvis Graves — and Anna and T.J. — return in this companion novella to the New York Times bestseller On the Island.

When twenty-three-year-old dot-com millionaire Owen Sparks walked away from his charmed life, he had one goal in mind: get as far away as possible from the people who resented his success, or had their hand out for a piece of it. A remote uncharted island halfway around the world seemed like a perfectly logical place to get away from it all.

Calia Reed wasn’t part of Owen’s plans. The beautiful British girl — on holiday in the Maldives with her brother, James — made Owen wonder if getting away from it all might be a lot more enjoyable with a carefree girl who didn’t know anything about the life he left behind.

But Owen had no idea how much his carefully detailed plans would go awry. Nor did he realize that a decision he made would have such a catastrophic effect on two passengers who boarded a plane in Chicago .

And when Owen shows up at Anna and T.J.’s door with an incredible story to tell, everyone involved will learn just how much their lives are intertwined. 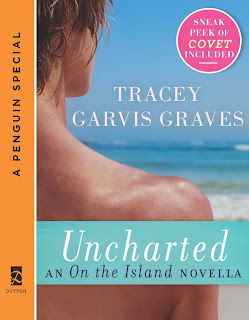 And last but not least, here’s an excerpt from the novella.


UNCHARTED
Chapter 1
OWEN
The house is isolated, surrounded by trees and a well-kept lawn. There’s a children’s play set in one corner of the yard, and an abandoned tricycle on the front sidewalk. Spring has only just arrived in the , but someone has already drawn a hopscotch pattern with pastel-colored chalk. A sign stuck in the landscaping by the front door announces that the home is protected by ADT, and when I ring the doorbell a dog starts barking, followed by the sound of thundering paws.
The woman that answers the door has a baby in her arms and two toddlers clinging to her skirt. The dog, a large golden retriever, snarls and waits for her to let it out. I hope she doesn’t. Her blue eyes narrow as she peers at me behind the safety of a storm door that I’m certain is locked. The glass muffles her voice, but I can still understand her when she says, “Can I help you?” Her guarded tone makes sense, the way it would if you lived out in the country and the world knew your story and had a ballpark idea of your net worth. “Is your husband around?” I ask.
“He’s upstairs. On the phone,” she says.
“I’d like to talk to you both. Mind if I wait?” She doesn’t like this. I can tell by the way she pushes the kids behind her and squares her shoulders, lifting her chin slightly.
Ah, she’s a fighter. This doesn’t surprise me at all.
“You’ll have to come back some other time,” she says, and starts to close the door. But before she can swing it shut all the way a dusty pickup truck pulls into the driveway and the relief washes over her face.
The man driving slams on the brakes and gets out of the truck almost before it stops moving.  He strides up to me with a suspicious expression on his face. Suspicious and pissed off. I’m older than he is, but he looks enough like me that people could mistake us for brothers; we have the same light brown hair and build.
He glances at the woman in the doorway. “Stay inside.” Turning back toward me he says, “Who are you and what do you want?”
“Just wanted to talk to you and your wife.”
“Do we know you?”
“No.” I put my hands in my pockets and remind myself of the reason for my visit. “My name is Owen Sparks.” The man looks at me, brow furrowed as he filters through his memory for the significance of my name. But the woman, the woman knows immediately, and we both turn toward her when she gasps.
“T.J,” the woman says. She opens the door wide so we can really hear her and the dog shoots out like a bullet from a gun, sniffing me aggressively but thankfully deciding that I’m no threat. “The missing person. The man whose trail went cold in the . Do you remember? His name was Owen Sparks.”
Recognition dawns on his face and they look at me like I’m a ghost. “Are you the guy who built the shack?” he asks.
“Yes.”
“But you’re not Bones.”
I shake my head. “No.” There’s no need for me to ask them what they mean. To ask them who Bones is.
Because I know.

Uncharted: An On the Island novella will be available in the US and the UK on July 2, 2013, wherever e-books are sold.