Can you believe White-Hot Hack will be here in less than a week? If you haven’t pre-ordered your copy yet, here are the links (release date June 7th):

The e-book pre-order price of $2.99 will be good through the first week of sale. On June 14th, the price will go up to $3.99. If you would like to purchase a signed paperback of White-Hot Hack (or any of my books), simply click on the store tab above.
You can also enter to WIN a signed set of Heart-Shaped Hack AND White-Hot Hack. Wouldn’t these books look beautiful displayed on your bookshelf? Natasha is a Book Junkie is hosting the giveaway – click here to enter (the giveaway is on the left sidebar of her website). 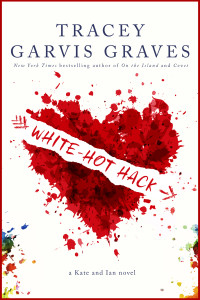 And here’s the prologue of White-Hot Hack for anyone who wants a sneak peek to tide them over while they’re waiting for more Kate and Ian. Enjoy!

The man in the business suit looked up from his phone when the tall blonde pushed through the glass doors of the office building, the rapid clicking of her high heels reverberating through the lobby as she hurried toward the receptionist.

She hoisted her shoulder bag a little higher and set a cup of coffee and sheet of paper on the counter. “I have a ten o’clock interview with Christopher Hill. I’m so sorry I’m late. There was an accident on the Beltway.” She sounded panicked and slightly out of breath.

He watched her with interest from his seat directly across from the reception desk. Arriving thirty minutes early for his appointment had left him with a severe case of boredom, and he welcomed the distraction.

As the woman turned to go, her elbow hit the coffee cup. Though they both reacted, neither she nor the receptionist moved fast enough to catch it before it spilled. There wasn’t enough coffee left in the cup to make a truly embarrassing mess, but it was enough to ruin the piece of paper lying on the counter.

“You have got to be kidding me,” the woman said, her voice carrying more than a trace of hopeless exasperation. She pulled a tissue out of her bag and dabbed at the liquid, then held up the stained document. “That was my last copy.”

“Résumé?” the receptionist asked. She looked old enough to be the woman’s mother, and her expression was kind and empathetic.

The woman blew out a breath and raised her fingers to her temple as if she felt the beginning of a headache. “Yes.”

He couldn’t help but feel sorry for her.

“Hold on a minute,” the woman said, sounding hopeful. She rooted around in her bag again, and when she withdrew her hand, she waved a USB drive triumphantly in the air. “I have the document saved on this. Could you please print me another copy? I hate not having my employment information at my fingertips, and I really need to nail this interview, especially since I’m late.”

The receptionist hesitated as if she seemed a bit uncomfortable with the request. But before she could protest, the woman leaned over the counter and pressed the USB drive into her palm. Then she pointed to a picture on the desk. “Whose baby is that? I’ve never seen such a beautiful child. He could model for baby-food ads.” She picked up the silver frame and took a closer look.

A look of pride spread across the receptionist’s face. “That’s my grandson. My daughter-in-law entered that picture in a contest. We haven’t heard anything yet.”

The woman leaned against the counter but did not make eye contact, keeping her focus on the picture instead. “He’s a shoo-in to win. Those dimples are to die for.” She sighed and mustered a faint smile. “It’s amazing how a picture of a baby can brighten your day, especially when it’s going so badly.”

The receptionist waited, the USB drive held awkwardly in her hand, but finally she inserted it into her computer, and moments later the printer whirred to life and spit out a piece of paper.

“You’re a lifesaver,” the woman said, holding out her hand for the résumé and tucking the USB drive safely back into her bag.

The woman sat down next to him, giving him a nod and a smile. She held the résumé loosely, careful not to crease it, and waited patiently.

The receptionist looked worried when she hung up the phone. “Miss? I’m sorry. Mr. Hill is not actually in the office today.”

The woman rose and walked toward the reception desk. “I don’t understand.” She sounded utterly defeated.

“His secretary said he took the day off. There aren’t any appointments on his calendar.”

She seemed to deflate. “Well, I guess I don’t have to be embarrassed about showing up late. The only thing more embarrassing than showing up late is showing up on the wrong day. I’ll double-check my notes. I must have written it down wrong. Thank you. You’ve been more than kind. I hope your grandson wins the contest.”

He caught a glimpse of the woman’s pink cheeks as she turned to go, and she left the building as quickly as she’d entered it.

He put away his phone and approached the desk, giving the receptionist a thousand-watt smile. “I’m sorry. I’ve been called away unexpectedly and won’t be able to stay for my meeting with Mr. Matthews.”

She smiled back at him. “Would you like me to deliver a message?”

He handed her a white card with the word SUCCEDO on the front in raised black lettering. “Please see that he receives this as soon as possible, and tell him I’ll be available by phone after two p.m. He has my number.”

The man left the building and headed for the parking garage to his left. The temperature was still in the high fifties and quite mild for early November, but the colder weather he loathed would arrive all too soon.

The woman who was having a colossally bad day was up ahead, walking a little slower now. He followed her into the garage and quickened his stride, catching up to her on the landing of the stairwell that connected the first and second levels. When he was close enough to reach out and touch her, she turned around and they slapped their palms together in a victorious high five. Ian pulled Kate into his arms and squeezed her tight.

“Too smooth,” she said, smiling and running the back of her hand along his clean-shaven cheek. He lowered his mouth to hers, and her bag slipped off her shoulder and landed on the concrete floor.

“I thought we weren’t going to break cover until we were in the car,” she said between kisses.

“I couldn’t wait that long, sweetness,” he murmured against her mouth. “You know delayed gratification isn’t really my thing.”

She pulled back and looked up at him, her expression hopeful. “How did I do?”

“You were incredible. I’m so proud of you.”

“Something came over me when the receptionist stuck that flash drive into her computer.”

“That something was the thrill of penetration. You’ll be chasing it from now on.”

“I was going to say hacker.”

“I bet you do. No wonder you like manipulating people so much. It’s just so…”

“The word you’re looking for is arousing.”

She kissed him and ran her fingers through his hair, which he hadn’t cut since the wedding. Why bother? Kate liked it long. He hooked her leg around his hip, causing the skirt of her business suit to ride up, and deepened the kiss because there were few things he enjoyed more than kissing his wife. When he finally pulled away, he reached for her hand and led her up the stairs.

“There are so many explicit thoughts running through my head about what I’d like to do to you in this stairwell, but we should probably be going. I’ve found that after infecting a network with that much malware, it’s never a bad idea to be on your way.”

The Escalade had been swapped out for a white Lincoln Navigator on their way back from Roanoke Island, and Ian unlocked the car and opened Kate’s door.

“Now what?” she asked as he slid behind the wheel and headed for the exit.

He yanked on his tie to loosen it. “Now comes the part when I get to explain to the client that the reason the IT department is losing its mind is because my partner did, in fact, successfully breach the network.” He glanced over at Kate and grinned. “This is the part of penetration testing I really enjoy.”

“I’d love to tell him the beautiful woman in the lobby was my wife and that it was her very first assignment, but I’ll refrain from bragging.” As proud as he was of Kate, the last thing he wanted to do was draw attention to her, and he certainly didn’t need word getting around about a husband-and-wife hacking team.

“Did the client think we wouldn’t be able to do it?”

“He was confident their computer systems were secure, and they are. Not secure enough to keep me out, but fairly difficult for others. When I write my report, I’ll point out their vulnerabilities and show him what I’m going to do to fix them. But what so many business owners fail to recognize is that one of the biggest threats to their cybersecurity is not their technology. It’s their employees. Humans are incredibly susceptible to manipulation. There’s a reason hackers consider the USB ruse an oldie but goodie: it almost always works. That receptionist didn’t really want to stick your flash drive into her computer, but she wanted to help you, so she talked herself out of saying no. She probably rationalized that someone as nice as you, someone who was having a bad day but who’d still taken the time to compliment her grandchild, couldn’t possibly be there to do any harm.”

“How bad was the malware?”

“It’s the real thing—I designed it myself. A penetration test isn’t going to be as effective if it doesn’t mirror an attack on the network. Using live malware will send them scrambling, but it’s nothing their IT department can’t handle. It’s good practice for them because if it actually happens someday, they’ll know what to do.”

“The receptionist won’t lose her job or anything, will she? She was so nice to me.”

“No, we’re not trying to get anyone in trouble. The reason the client hired us is so we can show them the ways in which a malicious hacker might take advantage of their employees so they can better prepare them. That receptionist will be the most secure person in the whole organization after this.”

“That’s true. No one is ever getting past her again.”

Ian looked over at Kate and grinned. “Was the baby really that cute?”

“Supercute. He probably will win.”

“I got lucky today. That was pretty much the ideal scenario.”

“Don’t sell yourself short. You’re much better at this than I was when I started, and you seem to enjoy it more than I ever did.”

“I loved it, but I know it won’t always be that easy.”

“That’s why we practice.” He and Kate had rehearsed dozens of possible scenarios so she’d be prepared no matter what obstacles she encountered.

She reached over the console and laid her hand on his inner thigh. “When we get home, I am going to climb you like a tree. You know that, right?”

He pressed down slightly on the gas pedal and smiled. “Sweetness, there was a reason I told the client I wouldn’t be available until after two. And even then, I’m not totally sure we’ll be done.”