Here’s another update for those of you who enjoy hearing about my writing process.

I’ve completed the first draft of my new book. I actually typed THE END almost two weeks ago, but then proceeded directly to the second draft, also known as the beginning of my revision stage.

The first draft is where you meet your characters and learn about their world.

Revision is where you find your story.

I feel – very strongly – that this stage is the most important part of the entire writing process (and for me it’s obviously the most enjoyable). You find out a lot about your characters in the first draft, but in order to develop them fully – to give them dimension, to make them leap off the page, to ensure their actions make sense – you need to be able to look at the story –and the active role your characters play in it – as a whole. And I really can’t do that until I’ve written the first draft.

The first thing I do when I start the second draft is send the first draft to my Kindle. Then, as I read the entire manuscript straight through, I highlight sections and take notes, adding them to the items I’ve already listed in my revision checklist. For example, there is an element of the hero’s backstory in the first draft that is totally cliché, and I’m sort of embarrassed that I couldn’t see it. But that’s one example of why revision is so important. Often the first idea that pops into your mind is the one everyone would probably think of, so it needs to be replaced by something not quite as obvious. A character’s backstory is part of the reason they act the way they do, and – bonus! – the element I came up with in the second draft actually makes more sense for the hero. Double bonus – it added some more dimension to a secondary character as well. This is the power of revision.

I mentioned in my earlier updates that I’d written a synopsis of this book for my agent, and that it had really helped give me a road map to follow as I wrote the first draft. But with the good comes the bad, and there was one particular plot point in the synopsis that really didn’t work the way I needed it to once I’d written it. And that drove me NUTS because it was a pivotal plot point and I thought it would be so awesome when I finally got to write it.

But it wasn’t awesome.

Because by the time I wrote it, I knew a lot more about my characters and their motivations. And the reactions of both characters in this particular chapter didn’t really ring true for the stage they were at in their relationship. This realization was incredibly frustrating and at first I tried to force a solution, which only made it worse.

Last week I was on vacation with my family for spring break. I had lots of time to let my mind wander and when the answer finally came to me, I realized where I’d gone wrong and what I needed to do to fix it. But I was only able to do this by looking at the story as a whole (and allowing myself the necessary time to figure it out). Interestingly, I had originally planned for this chapter to occur earlier in the book but then moved it a few chapters later. This no longer works, so I’m re-writing the whole chapter and moving it to where I’d originally planned for it to go. Sometimes this is the only course of action and I’m just thankful it was one chapter and not half a book. However, any time you pull a plot thread you run the risk of loosening something in another location, which means I now have a few other things that also have to be changed and moved.

One of the other things I’m able to do once I have a completed first draft is look at my story arc. I like using a three act structure (you may need to click on the picture to see it better). 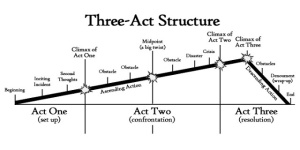 This doesn’t mean it has to be followed 100%. But it’s a great way to see if I’ve got rising action (including enough smaller conflicts), a big enough main conflict, and a nice wrap up.

I hope to be done with my revisions by early May. Then I’ll send the manuscript off for beta feedback. After that, I’ll write the third draft, do a hard line edit for grammar and rhythm, and give it a final polish. This is why I’ll probably always be a 1 book a year (or maybe 1 book plus a novella) author. I’ve learned (the hard way) that I really do need this much time in order to be satisfied with a book.

I would love to give you more details about this book (including why I decided to write it) and hope to do so in the next couple of months. I can tell you that it’s not The Girl He Used to Know, which is what I had planned to write next. I’ll still be writing that one, but not until I’ve completed my current project. This new book is straight-up adult contemporary romance, which is something I haven’t done since On the Island (at least in a full-length novel). After the heavier subject matter of Every Time I Think of You, I really needed to write something a little lighter (and I think my readers are ready for that, too).

In one word, this book is fun. The hero and heroine have lots of dialogue (and banter!). There is an external conflict in addition to the romantic conflict, which is my favorite kind of contemporary romance. Many of you have asked for a bit more steam, and I tried my best to kick it up a bit. However, you still won’t see certain words because I don’t think they’re necessary, nor do I personally find them romantic. The heat level of this book is similar to Jill Shalvis (who’s an author I love).

So there you have it! I’m very excited about sharing more on this project in the coming months.